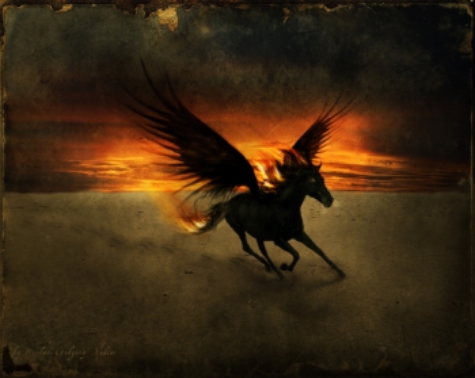 
This black Pegasus is a rarity and it has only been seen in the darkened forests where no light prevails. The legend goes that on a stormy night a group of beautiful white Pegasus had taking refuge within a dimly lit wooded area. Earlier that day a battle was near its end; the race of vampires had prevailed leaving the ever so weak demons to their demise. Once the blood thirsty vampires left the vicinity. It was the demons that knew that they had to forge into a body before they died.  Within the last hour of the creature’s life they found their opportunity; the white flying horses were going to be means to an end. As the dark entities rose from their withered bodies, a plume of ash rose upward making the area into a solid void. Once the majestic horses realized something was wrong they began to spread their wings in effort to fly away from that accursed place. It was too late, the demons began to insert there demonic souls into the innocent but feral Pegasus.  It was a surreal moment when the evil souls merged into the pure creatures tainting the sterile spirits with hatred, deceitfulness and that dark energy that only a true demon possesses. As the blanket of ash lifted a once “pure” creature that was white now pitch as night. As the demonic horse breathes a fiery hue emerges from its nostrils. Crying out the new majestic being belted out a call to its foe’s with a long range of fire streaming from the mouth.  Soon the heard flew into the night and as the rain fell, lights flickered into the sky. As the vampires collected themselves from that day, they saw images of these inferno wielding beast but paid no attention to them. That would be a grave mistake for the rest of all mankind to endure.