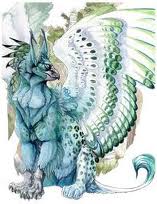 According to tradition the Adar Llwch Gwin were giant birds similar in kind to the griffin, which were given to a warrior named Drudwas ap Tryffin by his fairy wife. The name derives from the words llwch ("dust") and gwyn (white). These birds were said to understand human speech and to obey whatever command was given to them by their master. However, on one occasion, when Drudwas was about to do battle with the hero Arthur he commanded them to kill the first man to enter the battle. Arthur himself was delayed and the birds immediately turned on Drudwas and tore him to pieces. Later, in medieval poetry, the phrase Adar Llwch Gwin came to describe all kinds of raptors including hawks, falcons, and sometimes brave men.