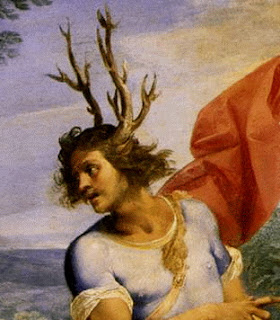 (/ækˈtiːən/; Ancient Greek: Ἀκταίων),[1] in Greek mythology, son of the priestly herdsman Aristaeus and Autonoe in Boeotia, was a famous Theban hero.[2] Like Achilles in a later generation, he was trained by the centaur Chiron.
He fell to the fatal wrath of Artemis,[3] but the surviving details of his transgression vary: "the only certainty is in what Aktaion suffered, his pathos, and what Artemis did: the hunter became the hunted; he was transformed into a stag, and his raging hounds, struck with a 'wolf's frenzy' (Lyssa), tore him apart as they would a stag."[4] This is the iconic motif by which Actaeon is recognized, both in ancient art and in Renaissance and post-Renaissance depictions.